Emmy Award Nominee Hannah Waddingham (“Ted Lasso”), Richard Ayoade (“The IT Crowd”), Matt Berry (“What We Do in The Shadows”),
Pam Murphy (“Mapleworth Murders”) and Duncan Trussell (“The Midnight Gospel”) to Star 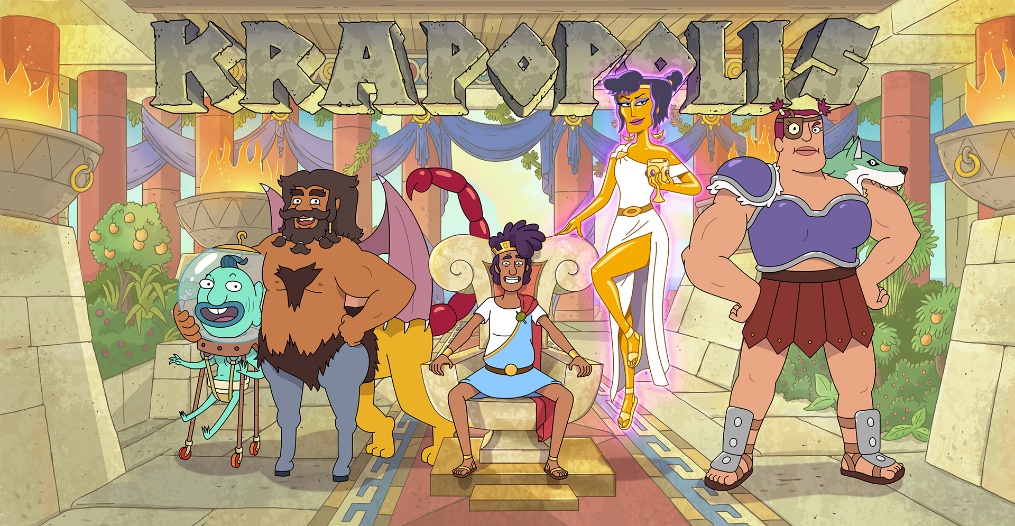 KRAPOPOLIS centers on a flawed family of humans, gods and monsters that tries to run one of the world’s first cities without killing each other.

In the series, Ayoade voices “Tyrannis”, the mortal son of a goddess. He’s the benevolent King of Krapopolis trying to make do in a city that lives up to its name. Waddingham plays “Deliria,” Tyrannis’ mother, goddess of self-destruction and questionable choices. Within her extended Olympian family – forged in patricide and infidelity – she’s known as the trashy one. Berry is “Shlub,” Tyrannis’ father, a mantitaur (half centaur [horse + human], half manticore [lion + human + scorpion]). He is oversexed and underemployed, claims to be an artist and has literally never paid for anything, in any sense of that word, for his entire life. Murphy voices “Stupendous,” Tyrannis’ half-sister, daughter of Deliria and a cyclops. Trussell plays “Hippocampus,” Tyrannis’ half-brother, offspring of Shlub and a mermaid, and, obviously, a hot mess, biologically speaking.

The series is an outgrowth of the direct animation deal Harmon and FOX Entertainment unveiled last year. Wholly owned and financed by FOX Entertainment and to be produced by FOX’s Emmy Award-winning animation studio, Bento Box Entertainment, the project also is the first series to move forward under FOX’s broadcast direct model. Additionally, KRAPOPOLIS will serve as the first-ever animated series curated entirely on the Blockchain, as FOX and Bento Box enter the NFT business. The company will launch a dedicated marketplace for KRAPOPOLIS that will curate and sell digital goods, ranging from NFTs of one-of-a-kind character and background art and GIFs, as well as tokens that provide exclusive social experiences to engage and reward super fans.  An NFT of the KRAPOPOLIS cast image is minted on the Eluvio content blockchain with token metadata.

Harmon is the creator and executive producer of the long-running comedy series “Community,” garnering multiple Emmy Award nominations, Critics Choice Awards and more accolades. He is also the co-creator and executive producer of “Rick & Morty,” which won Emmy Awards for Outstanding Animated Program in 2018 and 2020. In 2015, Harmon executive-produced the Academy Award-nominated animated feature film “Anomalisa.” Writer/producer/animator Jordan Young (“Drawn Together,” “Bojack Horseman”) has been named executive producer/showrunner. Young will work under Harmon’s supervision and handle the series’ day-to-day activities.

ABOUT THE CAST
Hannah Waddingham is an award-winning actress and singer. Waddingham currently has received critical acclaim for her role as “Rebecca” in the award-winning comedy “Ted Lasso.” She won the 2021 Critics Choice Award for Best Supporting Actress in a Comedy Series and the 2021 Hollywood Critics Association Award for Best Supporting Actress in a Streaming Series, Comedy, and she is nominated for a 2021 Primetime Emmy Award for Outstanding Supporting Actress in a Comedy Series. Additional nominations include the International Online Cinema Awards and Television Critics Association Awards. The cast was also nominated for a Screen Actors Guild Award for Outstanding Performance by an Ensemble in a Comedy Series. Waddingham also is known for her scene-stealing, GIF-generating run as “Septa Unella,” the Shame Nun, in “Game of Thrones.” Past television work includes “Sex Education,” “Krypton,” “12 Monkeys,” “In The Club,” “The Entire Universe,” Jack Dee’s “Bad Move,” “Josh,” “Partners in Crime,” “Benidorm,” “Miss Marple-The Mirror Crack'd,” “Not Going Out” and “My Family,” among others. Feature work includes “The Hustle,” “Les Miserables” and “How to Lose Friends and Alienate People.”

Richard Ayoade is a multi-award-winning comedian, actor, writer and director. The success of “Garth Marenghi’s Darkplace” (which he co-wrote, directed and starred in) was followed by his BAFTA Award-winning role in “The IT Crowd,” and numerous other TV credits, including “The Mighty Boosh.” Ayoade wrote and directed the BAFTA-nominated film “Submarine” and wrote and directed “The Double,” starring Jesse Eisenberg. He’s also voiced popular characters in The Mandalorian” and the BAFTA-winning “Soul.” He presented “Travel Man” and “The Crystal Maze” for Channel 4 and has released three books, “Ayoade on Ayoade” and “The Grip of Film” and “Ayoade on Top,” all published by Faber & Faber.

Matt Berry is a BAFTA Award-winning actor, writer and musician. He was most recently nominated for a Critics Choice Award for Best Actor in A Comedy Series for his work as “Lazlo Cravensworth” in FX’s “What We Do In the Shadows.” In the U.K., he recently starred as “Detective Inspector Eli Rabbit” in “Year of the Rabbit” on the U.K.’s Channel 4. In 2015, Berry won a BAFTA for his performance as “Steven Toast” in “Toast of London” on Channel 4, which he also co-created. The show went on to earn six British Comedy Awards nominations, winning Best New Comedy Program, and was recently announced to be picked up for a much-anticipated second season. Previously, Berry starred in “The IT Crowd” for five seasons on Channel 4, BBC2’s “The Mighty Boosh,”Channel 4’s “Garth Marenghi’s Darkplace” and BBC3’s “Snuff Box.” He also appeared on the last season of “Community.” Berry made a memorable appearance on “Portlandia,” starred opposite Sam Rockwell in “Moon” and appeared in the feature film “One Day.” He is a talented voice actor and musician, who recorded introductions for the 2012 London Olympic closing ceremonies and composed the music for “AB/DC: A Rock Opera,” “Snuff Box” and “Toast of London.” Berry has also released six studio albums to much critical acclaim.

Pam Murphy is a writer/performer currently based in Los Angeles, where she’s an active performer at the UCB Theatre. In 2020, she appeared as a recurring character in the Quibi series “Mapleworth Murders,” guest-starred in the cable comedy “Corporate,” and recurred in the network comedy “Single Parents”. In 2019, she shot a season-recurring arc in the upcoming “Weird City,” from Jordan Peele, while also recurring in the final season of “Crazy Ex-Girlfriend.” She also had a supporting lead in the independent film “All About Nina,” opposite Mary Elizabeth Winstead, which premiered at the Tribeca Film Festival. She started her comedy career at the NYC UCB Theatre. Her solo show, “The C Word,” was named Best Solo Show of the Year by Time Out NY. TV wise, she’s been on “Girlboss,” “Adam Ruins Everything,” “Another Period,” “30 Rock,” “Happy Endings,” “Key & Peele,” “Welcome To Sweden,” “Comedy Bang! Bang!” and many more. She’s also done a handful of videos for College Humor, Funny Or Die and UCB Comedy. She performs every Tuesday at 7:00 PM with Tuesday Club at UCB Franklin.

Duncan Trussell is a stand-up comedian, podcaster and actor. He has guest-starred on “Curb Your Enthusiasm,” “La La Land,” “MadTV” and “Nick Swardson’s Pretend Time.” He has also appeared on “This Is Not Happening,” the Emmy-nominated “Drunk History” and the Emmy-winning “Adventure Time.” Trussell’s podcast, “The Duncan Trussell Family Hour,” has over 500 episodes and averages 1,000,000 downloads per month. This podcast and the recordings within are the foundation of his streaming animated series “The Midnight Gospel,” which he co-created with Pendleton Ward, the Emmy-winning creator of “Adventure Time.”