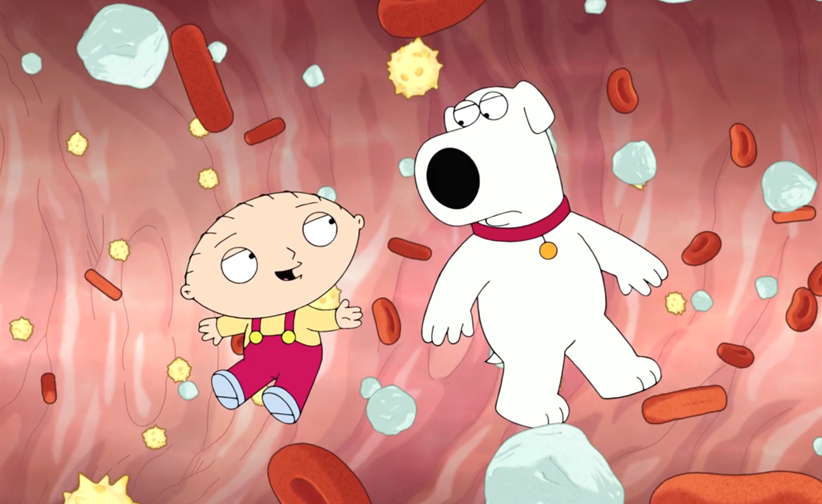 Seth MacFarlane and the producers of FAMILY GUY have created an original three-minute comedic short designed to educate, entertain and encourage the millions of unvaccinated citizens around the globe to feel confident getting vaccinated against COVID-19. Part “Schoolhouse Rock,” part educational film from high school science class, but told with all the irreverence and hilarity for which FAMILY GUY is known, the three-minute short finds Peter Griffin at the doctor’s office debating getting the shot, when Stewie and Brian teleport inside his body and explain how vaccines work. The tour de force short has MacFarlane voicing four characters -- Peter, Stewie, Brian and Dr. Hartman -- and was penned by the show’s writers, in collaboration with MacFarlane and a team of scientific experts and epidemiologists. The short was a joint production of Fuzzy Door, 20th Television Animation, FOX Entertainment and the Ad Council’s “It’s Up To You” COVID-19 vaccine education initiative.

Commented FAMILY GUY executive producers and showrunners Rich Appel and Alec Sulkin, “We were proud to work with some of the nation's leading immunologists and epidemiologists on this PSA. And while we never understood a single note they gave us, we took them all."

“With millions of Americans still unsure about getting vaccinated against COVID-19, it’s more important than ever that we have smart, informative and entertaining messages like this that will boost confidence in the vaccines,” said Lisa Sherman, President and CEO of the Ad Council. “This new work from Seth MacFarlane and the team at FAMILY GUY is bringing critical vaccine information to audiences in a fresh and hilarious way that will surely inspire people to take the next step in slowing the pandemic. We are grateful to our partners at Disney and Fox for their passion and collaboration at this pivotal moment in time.”

A link to the short can be found here: https://youtu.be/yJ0NgeMHOyQ

FAMILY GUY continues to entertain its die-hard fan base with razor-sharp humor, spot-on parodies, spectacular animation and orchestra-backed original music. Since its debut in 1999, the series has reached cult status among fans, and its breakout star, a talking baby, has become one of the greatest TV characters of all time. FAMILY GUY has racked up numerous awards, including an Emmy Award nomination for Outstanding Comedy Series, only the second animated series in television history to be honored with such a distinction. Most recently, series creator and lead voice actor Seth MacFarlane won the 2019 Emmy Award for Outstanding Character Voice-Over Performance and is currently tied for the most voice-over Emmy wins of all time (four) for his work on the show.

And to learn more about the COVID-19 vaccines, visit GetVaccineAnswers.org to get the latest information.